Hey everyone. Kept you waiting, huh?

So. October is nearly over and... no demo, steam launch, or kickstarter in sight? Well, the greatest villain of all has emerged to delay these things. And it's name is... production delays!

Let's talk them through. I've kept you all waiting, so I need to be transparent about what is going on at least.

So, the two major issues LoveSick Darling is dealing with right now can be divided in to two issues. Art assets. And Australian tax law.

So, as you noticed, the art has been trickling in here and there but... over the past two weeks, the transition between lineart production and colouring faced a major hurdle that took some time to get across. As you can tell, art was already behind schedule - but this new delay in production only made things worse. It's fair to say that the art asset delays are the main reason for the Kickstarter launch delay.

So, the story is this: I got new sprites commissioned for LoveSick Darlings from Ippers. They even re-visited the old sprites and updated them to match the style of the sprites for brand new character designs like Stuart, Grace, Albert, etc. After some time, an agreement was made between Ippers and myself. We decided to have someone else do colouring for the sprite line-art. This whole process took a lot longer than ever intended, and I'm sorry if people were keen for more of Ipper's colouring - but we will be moving forward with a dedicated colouring artist from now on. I hope you understand.

So, the somewhat jarring transition from sprite lineart to a brand new colouring artist was more lengthy and complicated than everyone realized. Not to mention lineart and character designs hit several delays. But we're back on the road. Colouring is getting into gear this weekend, and the new colouring artist (who will be revealed next update) is going to be working really hard to get this all done ASAP!

So, I have been in talks with local government authorities about how taxation and my kickstarter will affect one another. It's a long and complicated process to get the answers to the specific questions I am asking for, and even though I originally emailed them at the start of September... this has turned out to be a complicated issue that they have to consult with a lot of people about. This basically leaves me being only 90% sure my Kickstarter is structured appropriately and legally. The reason I need to make sure it is 100% legal and all the money is divided correctly between the game's funding, kickstarter fees, and tax is to make sure that everyone is 100% sure where their money is going when they choose to support my kickstarter. That and, if I get in trouble for doing something wrong: it is the game I am making which suffers for it, alongside the people who back me. Until I get an 100% clear verdict on my Kickstarter, I CANNOT make it live.

This is not just to protect myself, but most importantly, to protect the money my backers will provide to make LoveSick Darlings a reality. The deadline for the final verdict is mid-way through November, but hopefully I can get this sorted before then. I am so sorry something as silly as legalities is delaying the game's Kickstarter, but I don't wanna take any chances! I hope you all understand why this needs to be sorted before the Kickstarter can go live.

November. The Kickstarter, the steam release, and most importantly the 1.3 demo WILL come out sometime in November. All together. Because there was a bit of new recruitment in the sprite and colouring department, I can't say for certain when exactly everything will be ready - but as I said, the sprites are the MAIN unfinished thing the game needs complete. Once these are done, we are pretty much ready to go. I hope you'll stick with me until then!

So... how about some good news? That'd be nice!

Writing wise? I implemented a new font for text messages, and there are even... animations for sprites! Wow! They're pretty basic, with characters shuffling and bouncing around, but they add a bit of life to certain scenes! These aren't fully implemented, and are only in the first few days of the game - but I'm gonna keep putting them in.

I also implemented a CG gallery feature! It's pretty cool. Check out a screenshot here! Although, if you follow me on Twitter you probably saw this already ;) 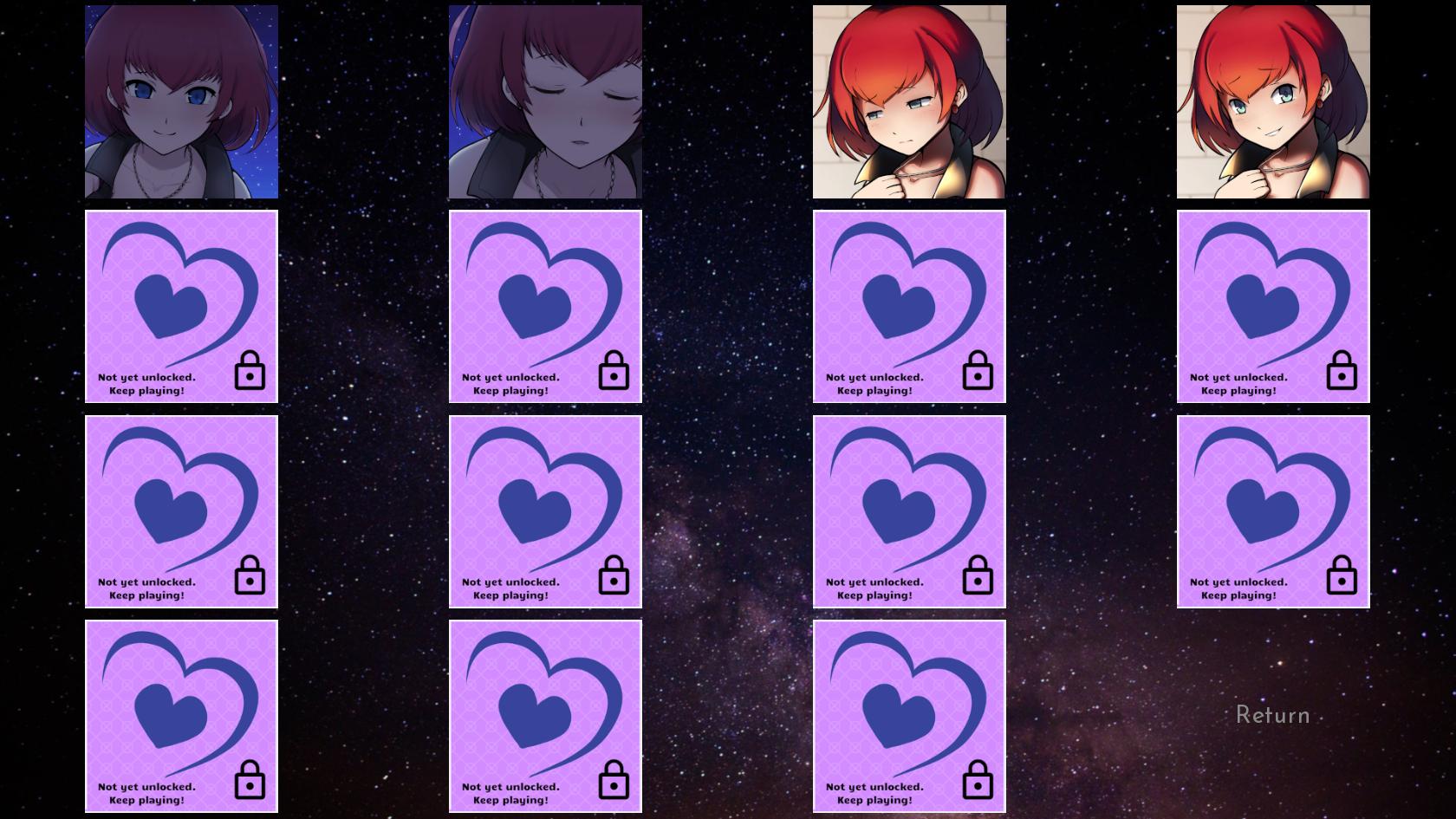 The Kickstarter page, rewards, description, and stretch goals are all complete! Woo! But, prices aren't finalized (as per above regarding the "tax law" section). But this is pretty much ready to go otherwise!

The Steam page is coming along. It's 85% ready. It's the graphics assets that I'm missing from here at the moment - but they're being worked on.

So, yeah. As you would have read above, art is having a rough time at the moment. Especially in the sprite department. But there are other departments of art that are going GREAT! Check these out: 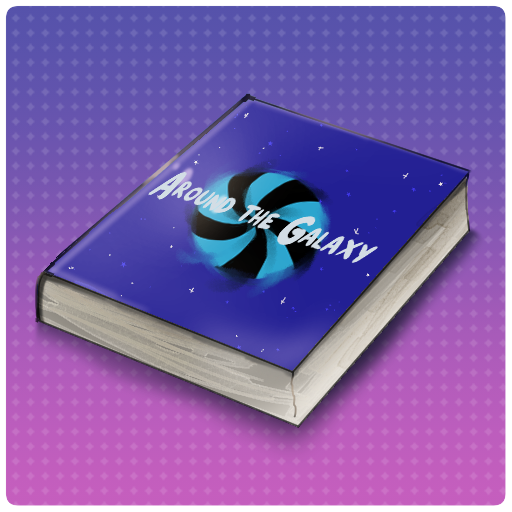 The great Maddy did these! Aren't they great? They're gonna be used for the evening free time sections! Along with some lunch ones too. It looks so slick and fancy now to visualize some of Syd's acitivites like this.

In case you didn't know Maddy has done a bunch of UI, logo, and other elements for the game (including "The Girl and The Beast!"). Check out her work here:
https://twitter.com/MadsMadnessRage

This was an update that was really hard to make. By missing this October deadline I had set, I really feel like I have let everyone down. Including myself.

The least I can do is be as honest as possible, and that's what I have been for this update. So at least you all know what's going on.

Thanks so much for believing in and sticking by this project! It's my first time making a game, especially one that is getting as big as this, but I really wanna deliver on all of your expectations for this game. I hope to keep seeing you all around until this game and the kickstarter launch goes live - and beyond!

In the meantime, got an itch for cool kickstarter porjects? Why not check out fellow Aussie VN developer HexVexed's game, "Beyond You!"? It seems like a cool mix between horror and fun high school hijinx. Plus, it's also Australian-made! Support their Kickstarter which is live NOW!
https://www.kickstarter.com/projects/hexvexed/beyond-you/description

Or if you're in an escape room/mystery mood, why not try the mysterious and charming "Blankspace"? It's another game by NoBreadStudio/Nayru, and it's definitely worth checking out! I love the demo.You can try out the free demo here!
https://nobreadstudio.itch.io/blankspace

Stay connected with the project by following me on the project on itch,  or following @LoveSickDarling on Twitter
Of course, you can also join the OFFICIAL Discord: https://discord.gg/qJ8JvAy

I hope I see you guys next time with a much more fun and exciting update. With much fewer apologies, and more hype than anything. Something along the lines of... "THE ROAD TO KICKSTARTER LAUNCH!" or something cool like that. Thanks everyone.

Thank you for mentioning Blankspace! :)
And don't worry about delays - they always happen with bigger projects, because there's no possible way for you to have absolutely everything under control - especially with first projects. So simply try to embrace the experience and learn from it. Your future projects will go smoother. :)
Remember - if gamedev was easy, everybody would be doing it.

Oh, it's no problem at all! You're welcome.

And too true about the nature of production and delays. It won't always be easy, but he best thing I can do is make the most of the unfortunate experiences :)