So, roughly three weeks ago  LoveSick Darlings' demo launched to the world.

The response has been nothing short of amazing. Every little bit of feedback and advice has been a godsend. LoveSick Darlings hit 400 downloads just earlier this week! That's at least 399 more downloads than I ever expected. Thank you to each and every person who gave this game a shot. Really, your support means the world to me. I want this game to live up to everyone's expectations, and I'll do my best to post updates here at least once per fortnight! (Call me out on this later if I forget to post!!!)

Kickstarter Future:
So, when LoveSick Darlings first launched on itch.io some of you may have seen that I mentioned the possibility of crowdfunding the game. In regards to this, I ultimately decided to postpone any crowdfunding/kickstarter plans. After hearing some wise words of advice, I decided that it wouldn't feel right to start a crowdfunding campaign and launch it with a demo that includes missing assets. The bottom line is that central characters like Stuart, Nacho, and more have blank silhouettes I made in 10 minutes as placeholders. This is simply not good enough when I am asking people to invest in and believe in this project. So I am going back to get these sprites done sooner rather than later. There are also several background assets I am not happy with and seek to improve. Once these two major things are settled: I will look into starting that Kickstarter. NOTE: Just because the kickstarter was postponed that does NOT mean I am going t stop working super hard on this game! I'm gonna make you all proud and happy with this game!

Watch here or on my twitter (@DAdoniou)/the official twitter (@LoveSickDarling) for more updates regarding future funding! Thanks so much for understanding. If you have any questions or concerns, ask me any time.

I'm going to detail any significant developments for you all in these fortnightly updates, including any crowdfunding news, but mostly focusing on game and asset progress along with patch notes. So here is the progress report for the last three weeks!

Progress on the game:
I still haven't had the time to go full-time on the game, and I can't until I earn enough money to live off of for a while, but progress is coming along okay! The past three weeks have been a lot of community building and player interaction - but it's been really fun and rewarding seeing everyone play my game and having the chance to talk to them about it! So far, I'm currently working on the social event for "Week 7" of the game. Keen observers may have guessed that "Albie's birthday" will be that week's "Social Event," but after some feedback I decided to shuffle this around. This week will instead feature the social event for another character... it will be an event where the friend-group goes to a protest rally in Sydney (the city) together - including an evening portion out on the town. Which might sound odd, but once you think about how passionate some members of the friend-group are - it makes sense that they have strong opinions and thoughts as teenagers growing up in the modern world! This event has a specific focus on a character much like how the art exhibition focused on Jayda. A special scene was added to the demo to reference this event, so check it out yourself if you have time :)
Albie's "Social Event" is still happening, don't worry. It is slated to occur in the early parts of "Week 8." So ,the "Protest Rally Social Event," and all the branching paths it creates (including all the paths leading to it) are currently what is being written. It's still early days though - I expect perfecting this event will take a while.

I have also been in talks with a possible editor for the game! Having someone dedicated to correcting any errors I make in the game's text will be invaluable and save me SO much time. Reading everything back over and over to make sure nothing is wrong can take up a lot of time. This could free me up to spend more time actually writing - which will improve the speed at which the game is released!

Progress on assets:
The artists/musicians/creatives are all currently getting back to me about certain stuff. Lots of drafting, but no new art is in production at the moment. Hopefully original sprites for the last few characters comes soon. These are: Stuart, Grace, Nacho (ew), Albie, and Tammy. Once these are in, I hope to set up the kickstarter!

LoveSick Darlings Demo Version - 1.1 RELEASE!!!
Patch Notes:
- a new scene was added in lunch segment of Week: 7, Wednesday! (the final day in the demo - let me know what you think!)
- fixed a few embarrassing typos
- fixed continuity errors to line up with future plans
- adjusted the rate of how much certain choices increase Syd's relationships with other characters (lookin' at you, Jayda)
- new title screen

You will need to download the latest version from the main page to see these changes in effect.

As said above there is a new title screen/promotional image in this update for the game by Phi Phi (@PhiPhiAuThon - check em out!). I'm pretty happy with it, and I think it really captures the essence of the main three heroines really well! Check it out below!

One last thing before I wrap this up - a poll! A nice and easy one to start us off. How interested would people be in watching me, the dev, livestream the game on Twitch sometime? I would love to answer viewer questions, and engage in a conversation with you - the fans - in real time! I would also love to introduce the game to people and get the name out there :)

Thanks so much for reading this and supporting the project! Your support means the world to me - and I can't wait to make this game the best it can be!
If you have any questions or queries regarding LoveSick Darlings, you can ask me any time.
Expect to hear more from me soon - maybe this time in two weeks? Maybe sooner. Only the future can tell. 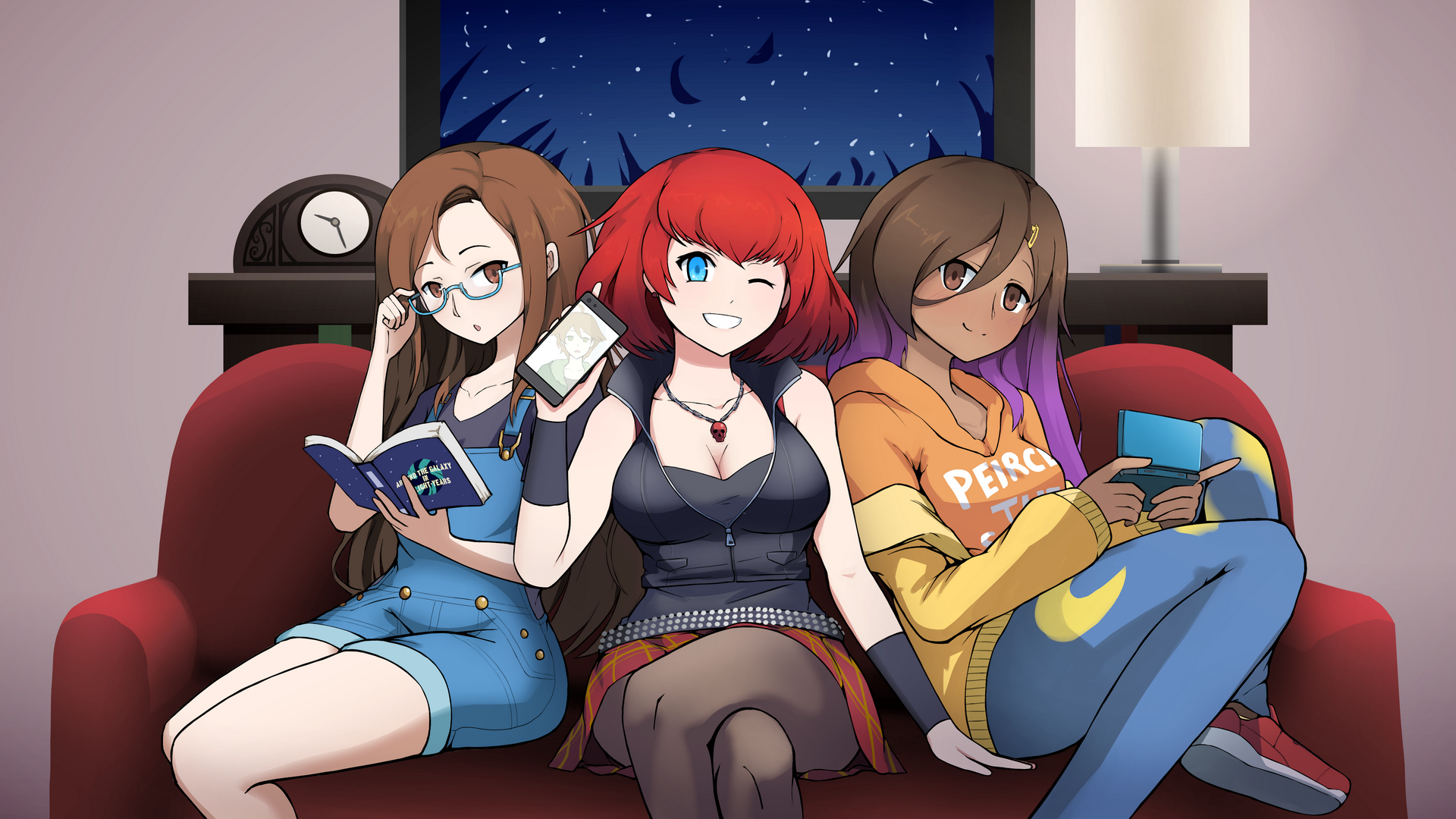 Hi! Just wanted to say that I am REALLY excited for your game even tho I haven't played the demo because I just want to wait for the final product (I am betting I am not the only one).

A couple of things:

The main idea is great and one of the reasons I am looking forward to this.

The character designs are GORGEOUS.  It is seriously hard to decide best girl by looks alone. They do not only look good, they really stand out and are not very generic. Btw this is actually one of the biggest reasons many indie VN's never take off, regardless of quality. Good art REALLY attracts people.

When you make the kickstarter it would be a good idea to post it at the /r/visualnovels subreddit, they usually support quality stuff (the Idol Manager guys did this)

Good luck with the project! This really looks fantastic. Take your time, don't rush it!

Thank you so much for your support and excitement! While a part of me wants to really recommend playing the demo if you're curious about the game, another part is kinda happy to see people so excited for the game that they want to experience it first in it's complete state. It's nice to hear, and in any case, thank you so much for the support.

Thank you for the kind words on the design! Ippers really knocked it out of the park with these designs and I really could not be any happier. Check out their other art and follow them on Twitter, all their art is just as good!

I posted this demo to r/visualnovels and the feedback I got was super good, and the analytics on itch.io tell me quite a few downloads came from the reddit post I made. I am very thankful for all their support so far, and will be sure to link the kickstarter then too!

I will make sure to find the balance between productivity and quality writing, don't worry :)
Thanks again for the kind words!