Hello! It's been just over two weeks since the last developer update - so I am here with a new one for you guys to dig into! Hopefully you aren't all too distracted by the glitz and glamour of E3, and I hope this devlog finds you all well. Here is the latest on LoveSick Darlings and the gang from Foster Hills High!

Right off the bat, since there is no version update or anything (there might not be one released to the public for a while either!) this update is gonna be relatively short.

The livestream I polled about during the last devlog was a great success! The stream was lively and had a nice variety of people came and went over the five hours. We got over halfway through the game, and I plan on wrapping up my run on Twitch next time I go live. Keep an eye out on the Twitter for when I go live next!

In fact, during the next stream, there may even be a special "surprise" or "sneak peek" for future content mixed in there... ;)
Only one way to find out! Tune in when we go live, and find out when that is by following @LoveSickDarling on Twitter.

As far as game progress is going... it's going well! It's been a bit of a middling week working on the game, as I hit a bit of roadblock with the second week's social event: "The March." The art exhibition is a section of the game I'm really proud of, and I feel like it was really positively received. The choices and consequences surrounding it felt really meaningful and carried a lot of emotion. Trying to recapture that now in a new event with a different set of circumstances and character focus has been much harder than I thought. But I'm getting through it! Bit by bit. In the meantime, when I got stuck, I actually worked a lot on Jayda's future free-time events (Jayda fans rejoice!). Which is what I do when I struggle with the "main game." I go back to someone's free time sections and write freely about one of the main characters. It's much easier writing these one-on-one sections, rather than these deeply complex situations like "The March" where I have to balance about six characters at once. Don't fret though, progress is still going okay on this front!

Second bit of great news: LoveSick Darlings has an editor! It's a person who goes by the name Xolf. In these last two weeks they've already gone through the whole game's script once with a whole set of changes and edits for the better! I'm very lucky and thankful to have them around, and this is already speeding up progress on writing the game! So, hurrah!

Honestly? Not much news on these fronts. Art and music are at a stand-still. I'm hoping to share more with you all next update!

Today's cover image was brought to you by: https://twitter.com/oxcoxa! They did a sketch request stream, and Xolf was generous enough to donate and request a picture of Maisy! This sketch made my day. I wanted to share it with everyone here too! Send me any and all fan art that shows up for my game, I love it.

But, speaking of assets, I had a question for you all regarding a certain set of assets in LoveSick Darlings...

I've decided to make a new segment on to these Devlogs specifically for me to pose a question to YOU guys. The player-base! This will be in the form of a strawpoll. This week's question is a big one...

Do you like the photographic backgrounds in LoveSick Darlings? And should they change?

It sounds simple, but it really entails a lot. The plan once was to create original backgrounds, but after looking into this, this is going to be a costly and lengthy endeavor. It will certainly push the game back at least a bit. With this in mind, I also want to note how attached I have become to the "photographic" backgrounds I have used in the game's demo. These were originally place-holders, but I think they come with a really unique aesthetic/atmosphere that adds a certain something to my game. I've always loved the "Gorillaz" music videos, Who Framed Roger Rabbit, and other media that impose a drawn characters into real spaces. Having my colourful anime characters occupy a photo-realistic setting kinda gives the game a certain realism I think can't be replicated. This ties well to the game's major theme that, despite being a dating sim with anime character art, this game has a realistic edge to it. That said, I'm sure not everyone feels the same way. Maybe I'm just coming at this from the perspective of a developer, and not seeing how/why players and others may think other backgrounds may look better.

This is something I have been wrestling with for a while. I have mixed thoughts on what I should do for backgrounds in LoveSick Darlings.  So, that's why I decided to open up the poll to the public! What do you all think?

I should clarify, nothing in this poll is going to be binding in any way or another. I just want to hear other people's perspective. Feel free to vote in the strawpoll above, and I'll be sure to keep it open for two weeks and follow up on the results during the next devlog. Also, feel free to comment here what you think if you have extended thoughts regarding this topic! It's also good to get this sorted sooner rather than later, as I don't want this to come up later as a problem once the game is nearly out/ready. Comment here, or send me a message. I don't mind - I like hearing from you guys :)

That about wraps it up though! Tune again in two weeks, or follow me on Twitter (@LoveSickDarling).
I wrote this before the Nintendo E3 presentation - so there's still a chance I'm gonna die for a day when that hits. I hope everyone enjoys this busy week of gaming news, and thanks for coming to this little corner to see what I have to say about my humble project :)

Thanks so much, everyone!

Here's another look at the lovely sketch "Oxcoxa" did of our OG LoveSick Darling :) 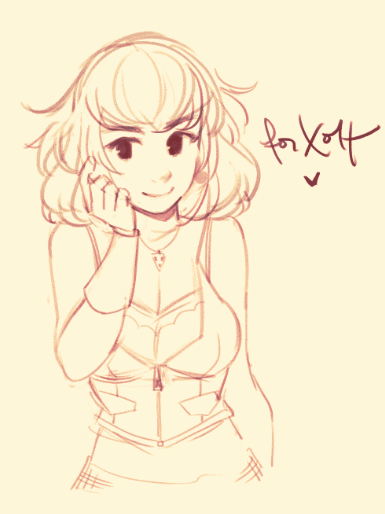 Backgrounds wise... while I can see the attraction in having hand drawn backgrounds that match the style of the artwork, I'm also inclined to think it would probably be a mistake to go down that route. Not because it would look terrible, not at all - but because it would take so much work (and time and budget) to create the sheer number of backgrounds that will be needed to portray the world our characters live in. And.. we have such human feeling characters, who live in what's pretty much the real world. Why not take advantage of the fact it exists (and that you more or less live in the same neighborhood as them)? Focus resources on unique signature pieces like Jayda's exhibition artwork, or additional sprite variations - and relish the opportunity and flexibility that you have in more-or-less living where the characters live.

Would the story work nicely if they could visit a particular location that doesn't already have a background, but they'll only visit it once? No problem! A photo may take mere moments out of your day to take a snap which will set the scene perfectly.

All that said, I do also favour lightly filtering the images, as Katawa Shoujo did; I think it takes the edge off the character/background contrast nicely. While Who Framed Roger Rabbit? in particular was amazing, that was all about toon characters in our real world; our darlings are very real characters in a real world, so I don't think we need so much contrast in style between the two.

And I should say that I'm really happy to have found LoveSick Darlings at this relatively early stage in its development; I completely agree about how much better a tale is when characters exist and interact with each other, and continue to do so even if the protagonist is pursuing a particular character's "route" (which I think has really let some of the "big name" visual novels down, too). And so I'm delighted to be able to help out behind the scenes doing time-consuming things like hunting down stray typos, which will allow Dimitri all the more time to truly develop the story and its characters. Meaning that in the end, we all hopefully get to read a better story, sooner (because let's be honest, it can't arrive soon enough).

I think those are some great points about the backgrounds!

The character in LoveSick Darlings are realistic (at least I hope they are) so putting them against a realistic background does add a certain something to it. I definitely agree. The resources for drawn backgrounds is also a lot more effort compared to taking pictures and maybe filtering them. Thanks for the input though! :)

And thanks so much for the kind words regarding the project! It's good to have someone so keen/excited in the game involved directly with it.