Hello! I'm back. Did anyone miss me? No? Right, well, moving along then... it's time for the long-awaited developer update #5! 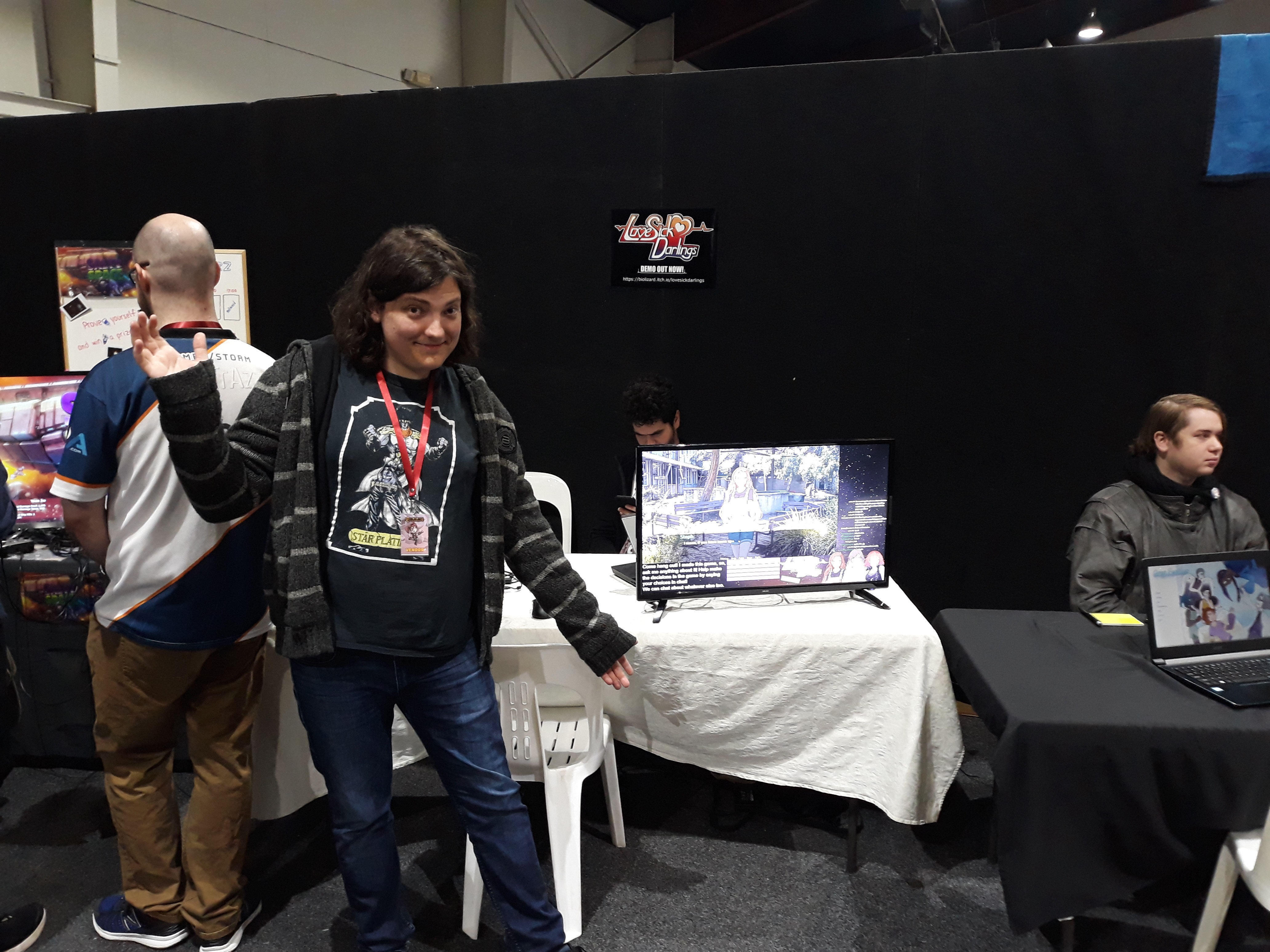 That's me and the LoveSick Darlings official booth! It was a cozy little booth, but with a good amount of passing foot traffic!

You likely saw me tweeting like crazy this weekend, but LoveSick Darlings ran a booth at GammaCon! It was great fun. We had heaps of people come by, and the con itself was a lot of fun. Canberra is a relatively small city in Australia, but it's great that we can have events like these to support creatives. My booth neighbours were both super nice developers too! Here's a quick shout-out to them both:

FreeFall Games has released their own visual novel: Grey Feather! It's available here, so do check it out: https://freefall-games.itch.io/grey-feather . It was great to chat and share experiences of being a visual novel developer with a fellow Canberran. The game is smartly written and has had a lot of work put into it. Check it out!

Then to my other side was NoMossStudios (https://twitter.com/NoMossStudios) with their game "Duped" and a demo of an upcoming game tentatively called "Salty Space"! They were both heaps of fun. Duped is available on Steam, and is heading towards a release on Steam in December! Check them out!

I wish I could share every game and artist I saw, really. There is so much talent here in Australia worth seeing!

I met countless great and friendly people, and was blown away by the positive reception and attitude towards my game. As someone making a visual novel, I am used to people being a bit turned off of my game by nature of it being a visual novel - especially when there are romance or "dating sim" elements - but there were countless people who were so excited and interested in the concept! I had a great weekend showing off LoveSick Darlings to the world.

It was not only LoveSick Darling's first time at a con, but it was also my first time showing a game or running a booth at a convention! I have been to cons as an attendee before, but it's a whole other world behind the scenes. This was an invaluable experience, and taught me so much. I would do it again in a heartbeat. You may all have to keep an eye out for me coming to a PaxAus sometime soon.... no promises, though! I will do my best ;)

Before I move on, I also want to thank my two friends who helped set up my booth, kept me company, and helped look after everything at the booth! Here's a blurry pic of us because I suck at selfies: 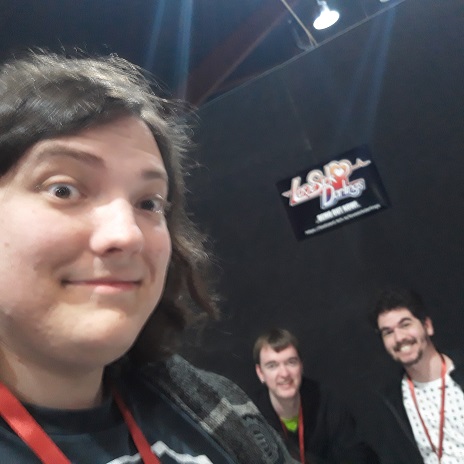 It was a busy weekend and couple of days leading up to it, so I'm super grateful for their help!
One of them doesn't have a Twitter, but check out my dude, Darcy: https://twitter.com/dseemerritt
He mostly posts about card games and idols, but if you like that stuff - check it out!

As you may remember, about a month ago, I left for my holiday to Greece! And with two days before GammaCon, I arrived back in Australia. It was a long and tiring plane flight, but I had to do a bit of a mad dash over those two days to get everything ready for Gamma. But all in all, it was great. My holiday was very relaxing, and I got to spend a lot of time with family I hadn't seen in a long time. I ate more gyro than any one man should, swam at the beach every day, and got around to finally beating Ace Attorney Investigations. All in all, a perfect holiday. I am now back and fully rested to get on to writing more of LoveSick Darlings! Let's make this last third of the year the most productive yet!

None this update! I just got off a plane and then went to a con and ran a booth, so I do hope it doesn't bother anyone that not much has been done yet... don't worry, more content is coming soon!

I am gonna wrap up the last of "Week 7" in the game, make sure all the loose ends have been tied before moving on to "Week 8"! We're in the latter half, now. Week 9 is the final week of gameplay, after-all. So much to wrap up in the game still! I hope you all continue to follow the project and support it! Thanks so much.

So, I left for my holiday with a rather large and imposing question to you all. I came back, and I'm actually a little surprised by the results. I thought they'd be a bit more split, but I'm relieved to see people are more interested in a Kickstarter for LoveSick Darlings. I'm much more confident in running a Kickstarter than a Patreon - so this is good news for me!

I'm gonna work on this for a while now. You may not hear me talk again about crowdfunding again for at least a month or so, but trust me - I am working on it. I'm gonna make a Kickstarter that is modest and also realistic, and I hope it can meet all of your expectations! I really want to make this game a reality. More than anything.

In the shorter term, I'm actually looking to release the free LoveSick Darlings on Steam in a few months with a big update. The planned update is going to finally get rid of those ugly placeholder sprites and backgrounds! And will feature another day or two of content (this update will launch on itch.io too). Additionally, the Steam release would also launch with a KickStarter not far behind. But I will talk about this in more detail later, I think...

On my holiday, despite how fun and relaxing it was, there were times I could only think about writing more for this game. Ideas for more scenarios, conversations, and touching moments characters could share. Now that I'm back, I can finally get right back into making more LoveSick Darlings!

I just wanted to say how good it feels to be back! And thank you all for your patience during this month of silence. Thank you! So much! I hope you continue to follow and support my humble little project!

See you all in two weeks for the next developer update! I should have some news regarding a steam release and progress on the game.