Hello everyone! It's the update you've all been waiting for. The Kickstarter announcement update is finally here!

A Kickstarter for LoveSick Darlings...?! It's more likely than you think!

That's right, I'm formally announcing it here: LoveSick Darlings is going to have a Kickstarter! It will be a modest Kickstarter that, assuming all goes well this month, will launch in late October 2019! This may change, as I admit right here and now: I've never ran a KickStarter before. I may be totally undrestimating how much work it'll be, but I am confident that I can get this campaign launched before the month ends. I'm gonna talk a lot about it over the next few weeks, so keep an eye on here and my twitter for news and updates!

This all may not come as a surprise to you if you've been hanging out in the official discord - I did first discuss Kickstarter plans publicly with everyone there. Join the discord to see all kinds of exclusive and behind-the-scenes teases and info!

Many of you may remember that I asked for your opinions on what kind of fundraising I should do for the full release of LoveSick Darlings about two months ago. I decided to follow through with what you all said back then! A Kickstarter was heavily approved by everyone.

But perhaps the substantial reason I have chosen to go through with crowdfunding is because of this: I have been personally funding and supporting this game for about 18 months. Frankly speaking, it's reaching a point where I hardly have any more money of my own to put into the game.

No matter what happens, I can put as much time, writing, resources, and energy of my own into LoveSick Darlings - but without money, I can't get things like music, voice acting, new CG art, UI design, new features, and more. I simply don't have the skills to produce these things myself. If I were to try and finish making this game without some of these assets, it'd be an incomplete game that doesn't best represent my vision for what I want this game to be. More than anything, I want to make this game the best it can be. I believe I can only do that with your help now.

That is why I am going to be doing a Kickstarter. I love this game, and it's made me so happy to be able to share as much as I have with all of you. I want to keep sharing it with you, moving forward too!

To find out more about Kickstarter's check out their official site:
https://help.kickstarter.com/hc/en-us/articles/115004996453-What-is-Kickstarter-

What is the goal of the Kickstarter?

This Kickstarter is not looking to make a profit. I simply want to have the money to fairly pay the composer (Tim Reichert), commission more art from PhiPhi for the game's CGs, advertising, and to cover any and all other fees associated with making this game a reality. Covering these costs will be the "minimum" goal for funding LoveSick Darlings. After gathering enough funds to get others involved fairly paid for their future work in LoveSick Darlings, then I can proceed with making this game! The minimum amount is still TBD.  I'm actually in talks with the Australian Tax Office to make sure I do everything right. Because it's important not only for me to, but for you - my potential backers - too. I want to do right by everyone! Once I am sure I understand and am obeying all the fees and tax laws - I  will have a minimum locked in to share!

After this "minimum" amount, I will throw in a few extras and moderate stretch goals - but nothing too extreme. I'd love to hire a certain internet media group to do an ad for my game but... I won't get ahead of myself.

Here is a neak peek of planned backer rewards AND stretch goals! (Subject to change!)

I wont go too into detail but some backer rewards include:
- digital copies of the game
- name in the credits
- premium discord channel access (secret channels I post exclusive stuff in!)
- custom scene requests (ever wanted Steph and Syd to go to a curry place and burn their mouths on intense curry? Pledge enough, send me your story ptich, and I will make it reality!)
- custom cg requests (want art to go alongside your story pitch? Or just want something custom illustrated? Just pledge enough, and Phi will make it reality!)
- name an NPC/teacher at foster hills high school!

And maybe a couple of other secrets and surprise stretch goals...!

100% of all money received for this KickStarter will go into securing the future of LoveSick Darlings, I promise you all that here and now.

I should also note that I have taken donations so far, all of which have been EXTREMELY appreciated. The Steam release was secured in it's entirety and then some thanks to your financial support thus far. Thank you all so much for the support, financially, but also emotionally for your enthusiasm and care for LoveSick Darlings!

I will post more and more about the Kickstarter as time goes on, but you will all see the full Kickstarter page for yourselves later this month! Things are going to ramp up, so keep an eye on the Twitter and official Discord too! I hope you all look forward to it.

In Other News - Voice Actors Confirmed?!

You heard it here first - or third, rather! If you follow the @LoveSickDarling Twitter, you will know all about the voice actors I confirmed for each major role in LoveSick Darlings! I did spend nearly the whole week posting and annoucning these roles. It's an all-Australian cast, to reflect LoveSick Darling's unique setting. In case you missed it, here are each of the VAs in their roles:

Those are all their Twitter handles! Give them each a follow and check out all the cool and amazing work they do! I'm honoured to have all of them on-board. It's so genuinely cool to have an all-Australian cast. I'm glad I really give this game the authentic sound such a down-to-earth game needs.

Voice acting is one of the major planned stretch goals for LoveSick Darlings, so if you'd love to hear from these people - make sure to check out the Kickstarter when we go live later this month!

With all the big and exciting stuff out of the way, I'm sure you guys also wanna know about the demo itself!

Progress has been good. I've been updating various features, and I actually wrote out the majority of all the "OtherWorld" and "Around the Galaxy" reading and reporting scenes. I also adjusted them slightly to match the pacing of how far 1.3 gets in the game.

Otherwise, just doing more internal mechanics and really time-consuming editing. This slightly more boring work will ensure that 1.3 is the cleanest version of the game yet, though!

A huge majority of my time has also been spent actually preparing a Kickstarter page and account. There's a surprising amount of paperwork, especially when it comes to crowdfunding in Australia! That and my graphic design skills are a bit... average. So making the Kickstarter page actually look appealing has taken more time than I ever thought. But that's okay, I left lots of time to make sure this kind of thing is all good!

Art is coming along. So is a trailer for the Kickstarter! Along with some more CGs. It's all going at a steady pace, for now.

Sprites are getting coloured now, but I think I'd rather not share what is ready until I can do it all at once. For now, here is a sneak peek at another character who was once a silhouette!

The villain of LoveSick Darlings. Or the next closest thing to a villain. An antagonistic force, in any case! But one might argue several characters can be antagonistic to Syd given the right circumstances... ah well, this guy is the worst at least. Enjoy the sneak peek! 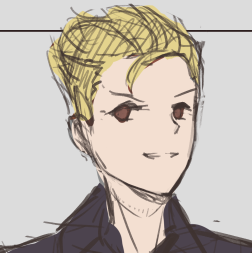 I could go for some mexican food right about now tbh

Thank you to everyone who answered last week's Question Corner!

Honestly, it was overwhlemingly in favour of hiring an additional artist for supporting assets. So, everyone, welcome Awan on-board to LoveSick Darlings!

Check out their Twitter, give them a follow, and gaze upon their lovely art! (Slight NSFW warning):
https://twitter.com/awan0918?lang=en

As discussed previously, the "social media system" they will be doing the art for is going to be a major stretch goal in the Kickstarter. The kind of art that Awan would do would be "profile pictures" and other "photos" displayed in-game as characters text and browse the web. So, if you'd love to see them do art for this project, let's try and hit that stretch goal together once the Kickstarter goes live! I'd love to see the kind of art Awan would make for LoveSick Darlings.

I'll have a new question next week for you all to answer in this corner.

It's an exciting time, as you may be able to tell. We're in the final weeks before the Kickstarter launch - which will truly decide the fate of this game.

I really am confident we can and will hit the minimum funding goal for this project. I have been honest and upfront, and really just want to pay the creatives I hire fairly for their hard work. All to make this game a reality. The only question left in my mind is... just how far will we get? I have some pretty cool goals planned, but even if we only hit a few of them - I would still be overjoyed with the support I receive.

But that's up to all of us I suppose. Your support and my hard work are how this project is going to get made - so let's all do our best!

Even if you can't back the Kickstarter when it goes live, if you share and spread the word across social media and people you know who might be interested - that'll be more than enough. Any and all support goes a long way.

Until then, stay up to date by following @LoveSickDarling on Twitter and by joing the Discord: https://discord.gg/qJ8JvAy

As always, thank you for taking the time to read this and for following the development of LoveSick Darlings - The Dating Sim with Consequences

(I'm workshipping a few subtitles for LoveSick Darlings - what do people think of this one? Is "The Dating Sim with Consequences" too on the nose, or is it perfectly intriguing?)

I've played this demo and loved it, and I have a Kickstarter account! If you start a Kickstarter for this, you can be sure I'll make a pledge. So far Jayda and Steph are my favorite characters, but Maisy's awesome too, I'm really looking forward to the full game!

Thank you so much for your support so far! And for vouching future support too! Fans like you are what help me keep going and keep working on this game :)